Not sure which style to pick? Here’s what you need to know:

Originally designed for sighthounds (ie, greyhounds, whippets, Italian greyhounds, etc)  and other dogs who have necks that are larger than their heads.

When these types of dogs put resistance on a flat buckle collar, the collar can easily slide up and off, granting the little speed demons wide open spaces to run to their hearts content. Enter the martingale.

Martingale collars gently “cinch” tighter when pressure is put on the smaller control loop.  This snugs the collar up on the neck, preventing the wearer from backing out of or slipping off the collar. 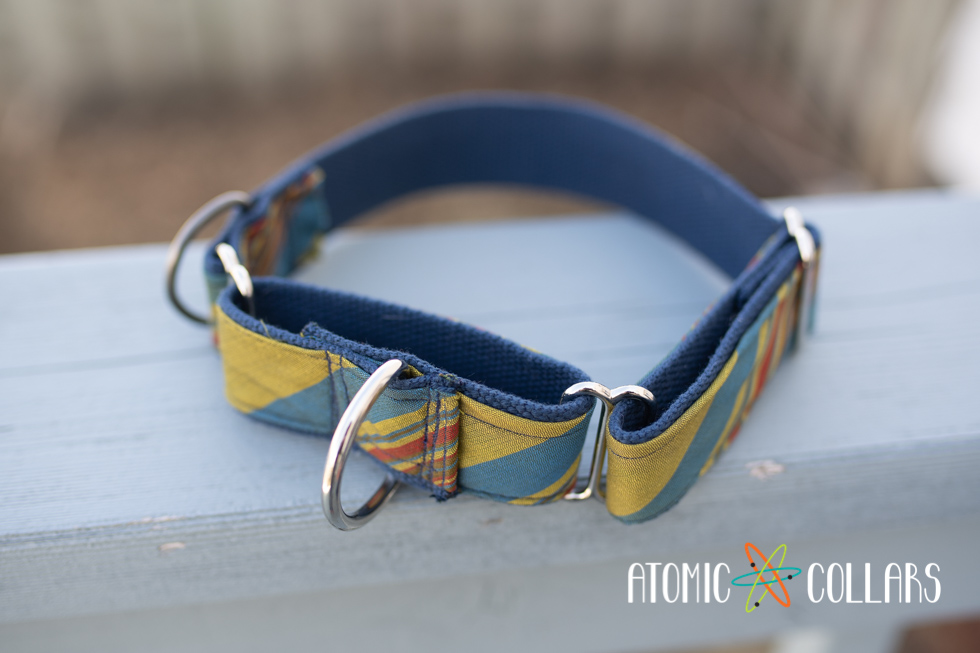 A cousin to the martingale, limited slip collars are also designed to cinch when resistance is applied to the collar, with a limit to the amount of cinch the collar can do. (You can’t over cinch the collar and choke your dog).

This can help keep a pup from backing out of the collar or give a puller some correction.

Unlike martingales, there is no control loop that can droop when a leash is attached. Limited slips feature a D ring threaded through an O ring that slides to a 2nd D ring. At rest, they lay flat.

The 2nd D ring acts as the stop as well as a tag holder.

Each limited slip is approx 2.5-3 inches of cinch. 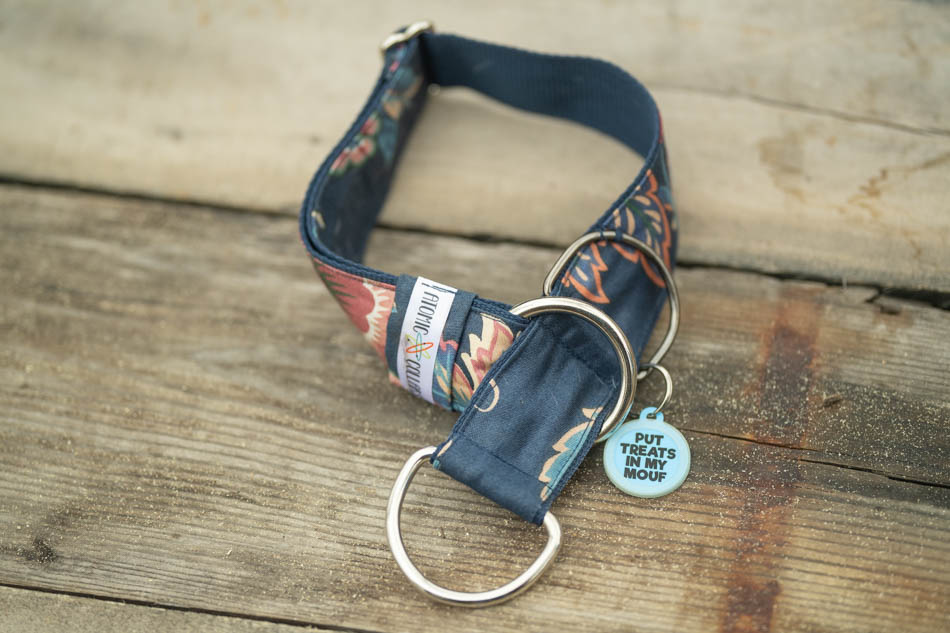 Classic and classy, the side release buckle collar is a staple in any dog’s wardrobe. Easy to put on with a quick clip, easy to undo with a pinch of your hand, sturdy enough to hold back any dog on the squirrel chase.

One D ring for leash and tag attachment plus a slider for sizing adjustments make up all the components of a side release buckle collar. 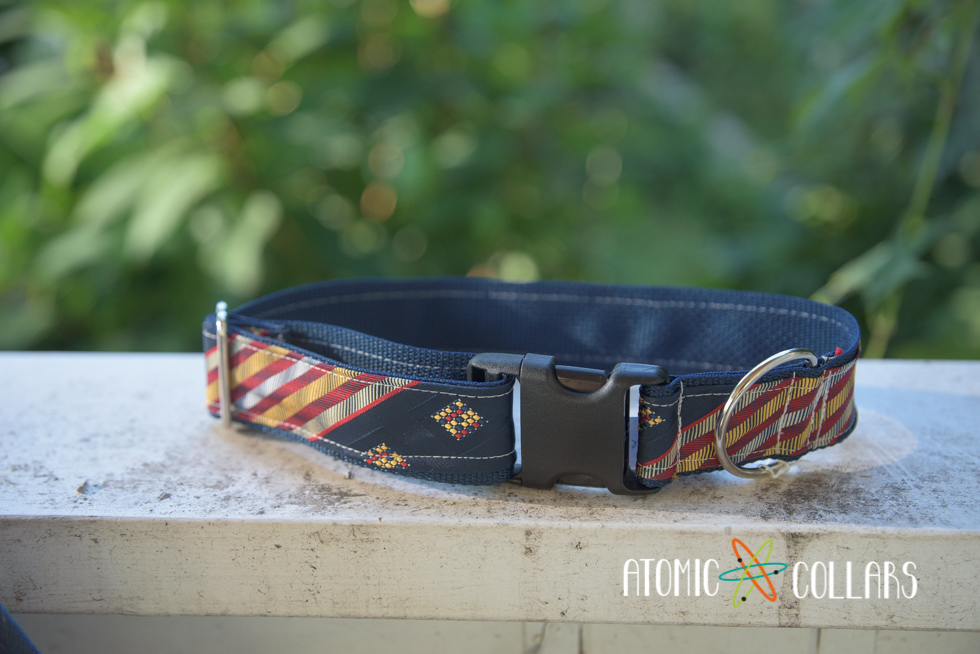 • Ready to Wear Collars & Scarves:
Packaged and shipped in 1 week from ordering.

• Custom Made Collars, & Scarves:
These need to be brought to life for your dog – this will take 2-4 weeks 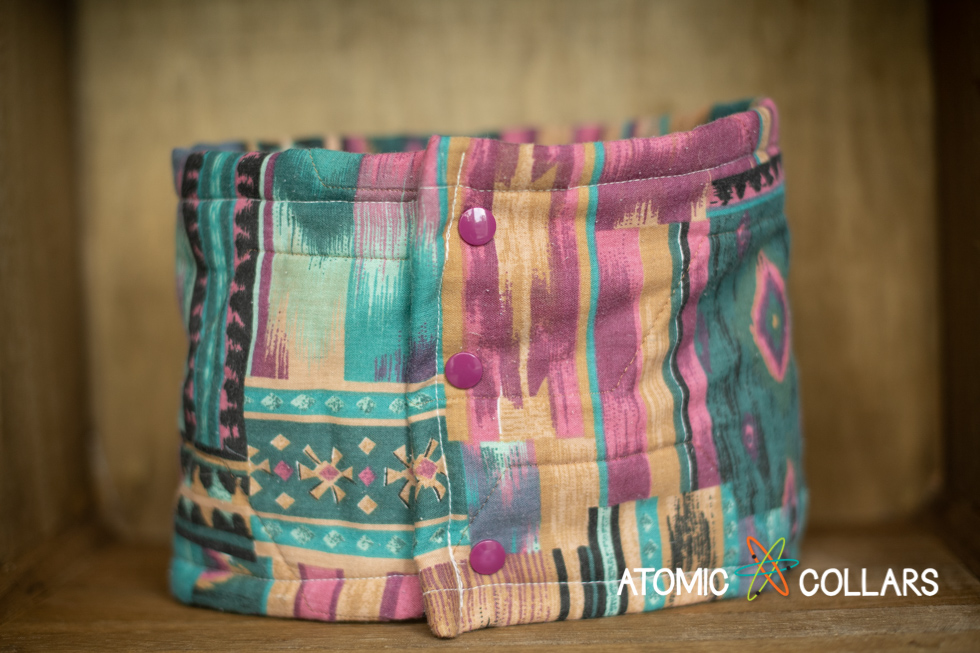 From as small as 10 inches to 24 inches or larger.

Most scarves will feature 1-3 plastic snaps for easy on & off, decoration and wearable versatility.  Most are 5 inches wide and will “scrunch” when worn giving them the look of an infinity scarf.

How to size for a scarf:

Scarves are one size, no adjustability. Aim for BIGGER than their neck size (and head size too if you’re getting one without snaps!). These are suppose to fit a little looser – similar to how you might wear a cowl or a looped infinity scarf.

Typically we recommend adding 2-3 inches to your dog’s neck or collar size to find the perfect fit.

All collars are made with 1.5 inch or 2 inch wide webbing.

** NOTE: the 2 inch hardware is a bit heavier and bulkier than the 1.5 inch hardware. Bender doesn’t mind it, but some dogs might.

How to size for a collar:

— Flat buckle: measure around your dog’s neck, make sure there’s a wee wiggle room – two to three fingers is good.

Match to size you need:

— Fitting a martingale or limited slip is just as easy!

Measure around your dog’s neck with a couple fingers worth of spare wiggle room. Both martingales and limited slips are designed to slide over your dog’s noggin.

** Note: if you have a blocky headed dog make sure to measure around their head as well! That way the martingale will slide over their noggin and not get stuck on right above their eyebrows giving them a funky facelift!

(Bender the pittie has a 17 inch neck and an 18 inch wide head – anything smaller than 18 inch won’t fit over his giant noggin even though his neck is an inch narrower!)

Plus each type of collar is fully adjustable to fit every dog perfectly.

Meet the common Upcycled The materials we use:

— man made / synthetic found frequently in clothing & bedding. It has high water resistance and is highly stain resistant.

Have a dog who’s rough & tough on collars or likes water/mud? Look for the material to be listed as 100% polyester.

–Silk is a natural fiber and has a smooth, soft texture. Silk is one of the strongest natural fibers when dry!

For that touch of luxury, pick a silk material. Be aware: silk is absorbent to moisture & smells (this means you could end up with a stinky collar if your pup delights in lake swimming).

— natural fiber, one of the warmest and softest materials, a definition of luxury. It breaths, wicks moisture, is lightweight, and not itchy.

This may NOT be the best option for the mud loving, rough and tumble dog as the material is delicate & needs a little more care in washing.

— man made fiber, does not breath, retains warmth (think sweaters & scarves), is lightweight & soft (a classic alternate to cashmere).

Acrylic may hold on to smells a bit so a collar with acrylic may be a big more “doggy” smelling or funky from swims in the lake.

Other materials that may be found:

CARING for your collar or scarf:

Caring for your collar is easy peasy!

Chances are it will get dirty in a degree of a speck of mud to wallowing in a mud puddle (we’ve all seen those videos… oh dear!). When dirt happens, toss your collar right into the wash on a regular cold or delicate cold cycle.

Yup, even the silks. 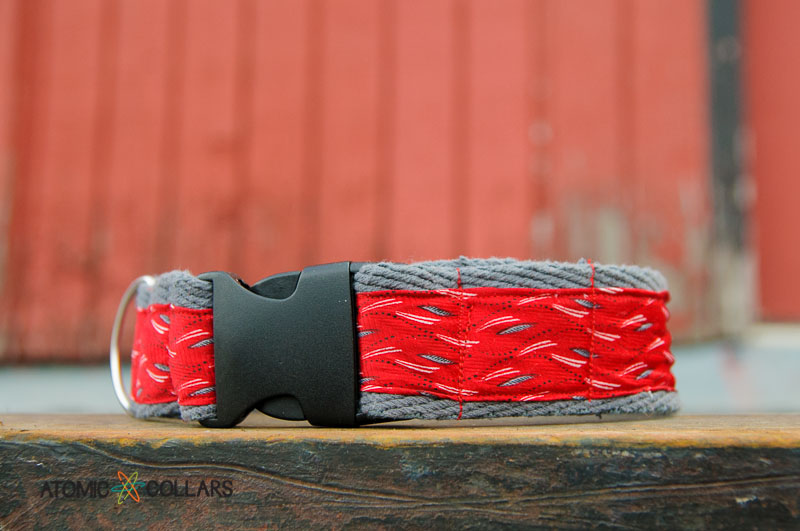 (Trust us, we’ve run silks and polyesters both through the wash – the above collar has been washed at least twice – the red is still vibrant and the touch is still silky/smooth!)

When they are finished in the wash, lay flat or hang to dry. Once dry, redress your pup and let the adventures continue!

For scarves, treat them in the same manner – pop into a delicate cold cycle wash (yes the silks too!) and lay flat to dry. When dry, pop back on your pup and continue on your adventures!

— as a scarf or collar, cashmere needs to be very delicately hand washed with super delicate soap – baby shampoo will work beautifully!

— use cold water and gently wash

— depending on dirt level, soak up to 15 mins, rinse in cool to cold water

— depending on level of dirt, soak up to 30 mins, rinse with cool to warm water

*That being said, if you don’t have the time to hand wash a collar or scarf of cashmere, wool or acrylic, then toss them into the washer on a delicate or handwash setting with cold or cool water. Lay flat to dry ALWAYS!

Get rid of “DA FUNK”

There may be times when your dog’s collar gains “da funk” and smells like he’s been living in the swamps with the creature from the black lagoon.  Adorable, but the stink is nearly enough to drive you from home.

If you haven’t, give the collar a solid washing. Da funk still present?

Try:
— a wash with baking soda
— a rinse with white vinegar (don’t mix them or there will be a volcano in your washer…)
— sun and air dry
— a laundry additive – try one for animal enzymes

If these don’t work, then its time to retire it to live in the garage for lake outings. Or get a new collar!

My dog wore out his collar…

Yes, the collars can wear out. If this happens, let us know! Send us the collar, pick your new found fabric and we’ll use the hardware in a brand new BOMB collar for your pup! (If the hardware is shot, best to get new!)

Every Atomic Collar that gets worn out can have its hardware recycled into a new collar for half off the cost of a new collar! Mega spiffy! 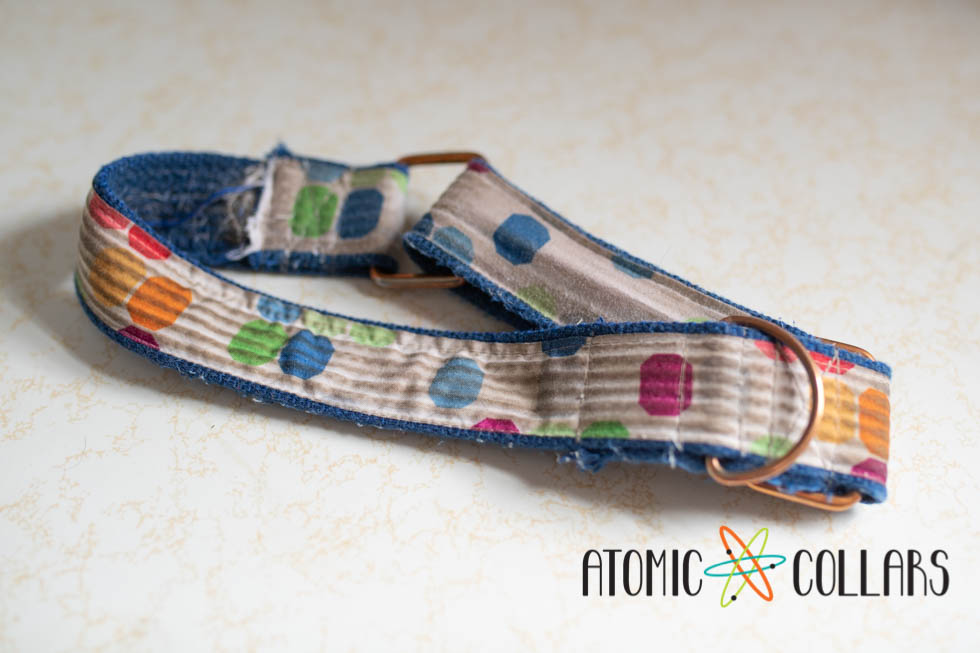 Where are they made?

These hunks of awesome are created by hand in the middle of the frozen land of Minnesota (pronounced Minne-SNOW-ta in winter) and shipped to dapper dogs all around the country.

You get to be well-dressed, why shouldn’t your dog have a wardrobe of BOMB collars and be well dressed too?

Those classic chunks of fabric tied in elaborate knottings at the throats of men, adorned in various patterns (some overly bold even for their retro days when new) and materials from every man to elegant (polyester to silk).

We started with neckties.

From neckties we adventured into the world of found articles of textiles – skirts, pants, blouses & sweaters, curtains, bedsheets, one zippy retro kitchen towel (Orange You Glad) nothing was safe from inspiration and the scissors and being transformed into wearable for dogs.

Our favorite material sources to upcycle: neckties, leggings and scarves.

THE BEGINNINGS OF ATOMIC COLLARS.

The year: 2015. The day: a blistering cold February day in the middle of frozen Minnesota. Foster pittie Bender (who ended up being a foster fail) was in need for a collar in the martingale style that was more than the basic, narrow width red, blue or black nylon options at the local big box stores.

Not to mention, finding “cute” collars for big dogs was a task in itself (put a 1 inch wide collar on an 85 lb rottie and it looks like a teenie weenie G string!).

To solve the problem: Start with a trip to the thrift store.
Hmmm…. belts for webbing & hardware, neckties are dapper, bold and super unique.

The finds: a couple of men’s belts and a classic dressed necktie in bold red, blue and cream. Two square loops and a D ring upcycled from two of the belts, the sewing machine lugged to the kitchen table and the birth of the Atom occurred.

It had wonky sewing (crazy driving as its coined around here) and didn’t adjust, but it fit, looked BOMB and held up to wear and tear from Bender. 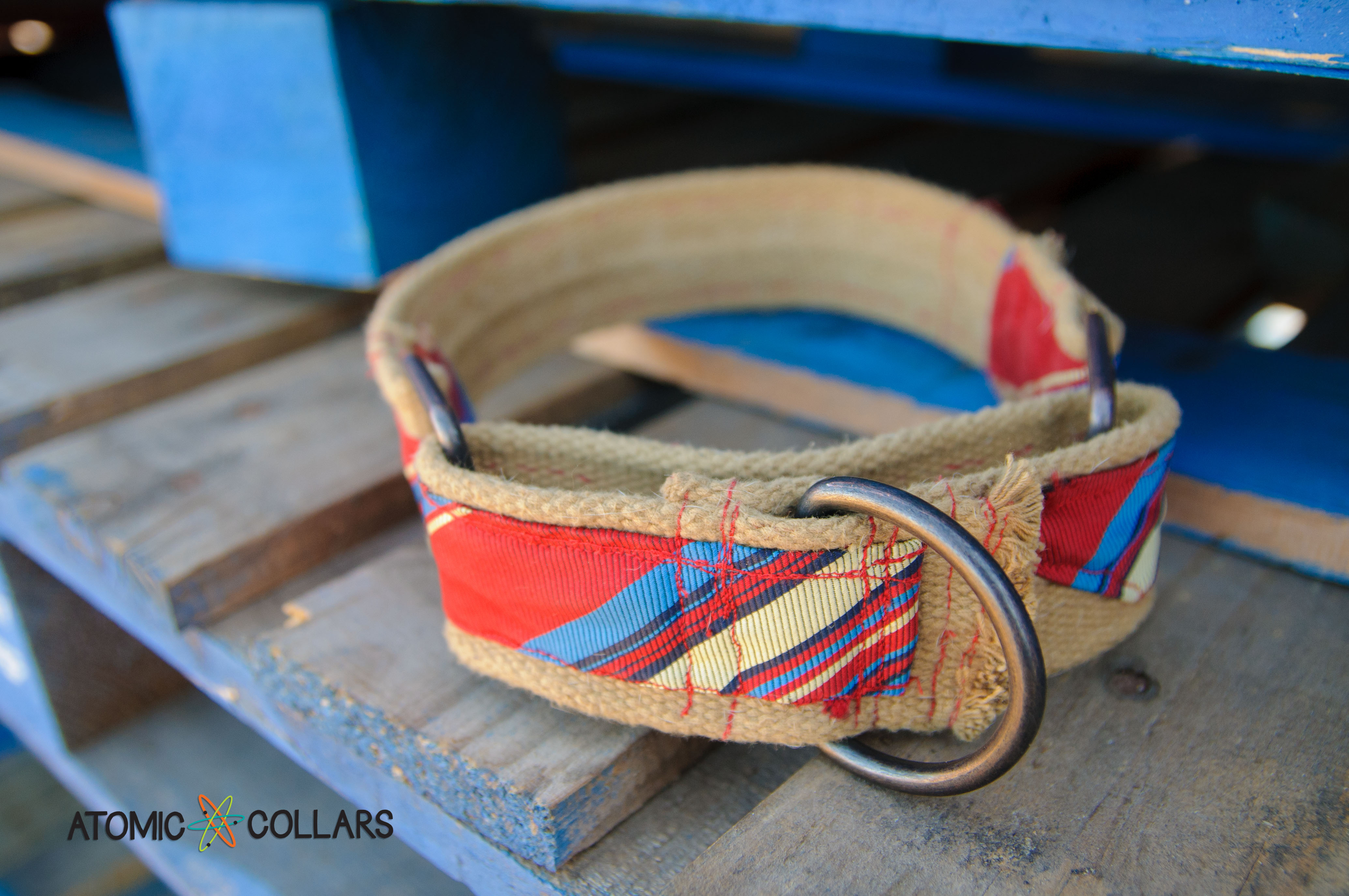 From the Atom split a plethora of collars, each featuring wide collar widths (the narrowest here is 1.5 inches) and unique patterns found no where else. Which lends to utterly unique collars, collars as unique as the dogs wearing them.

Above: 6 of the original collar patterns. Chaotic Celtic, Pixel & Chaotic shown were transitioned into the personal collection.